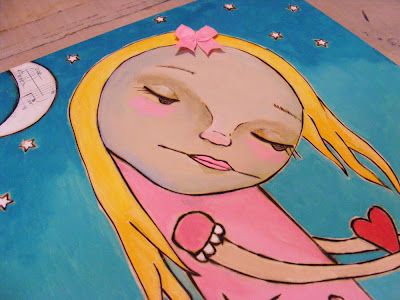 I know... I know! I keep mentioning Mindy Lacefield and her online workshops that I've been taking. But that's because PLAY is my word for 2013, and they are just so darn fun, and...  I'm "trying on" lots of new styles in an effort to discover my own. Wheeee! 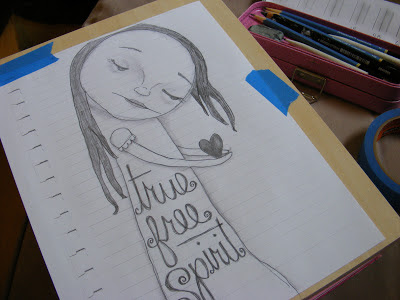 I had made a practice sketch in my notebook (before putting paint to canvas), but had decided to turn her into a wood burning instead! I love burning wood and it had been awhile. So I transferred my drawing to a wood panel and started my adventure! 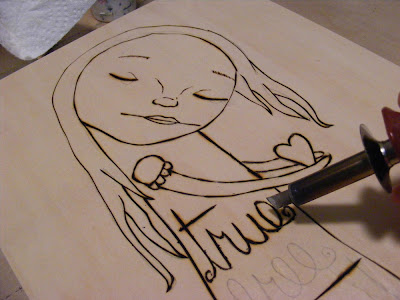 Mmmmmm... can you smell the burning wood? Smells just like a campfire! I was totally in my element. 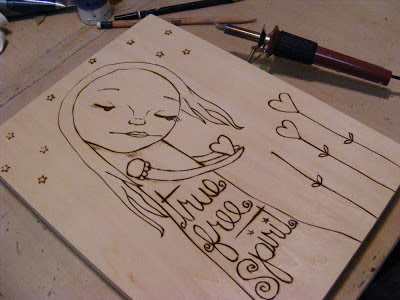 The flowers came about on their own, and the stars were made with a special attachment that came with my wood burning tool. A nice balanced composition was shaping up. Now for some color. 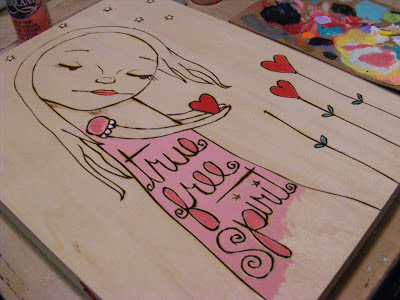 The magic really happened as I started to paint. She began to come alive! I took my time and made a point to enjoy the process, as my perfectionist side does not like to get paint on the wood burnt outlines! So I painted slowly and methodically, choosing colors carefully. 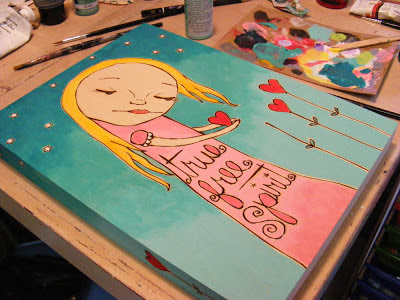 Did someone say pink and teal? 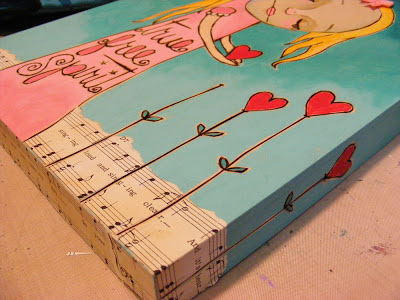 I wanted to add details and embellish the piece and torn vintage music sheets really fit that bill. I aged it a bit using Antique Linen and Tea Dye Distress Inks. 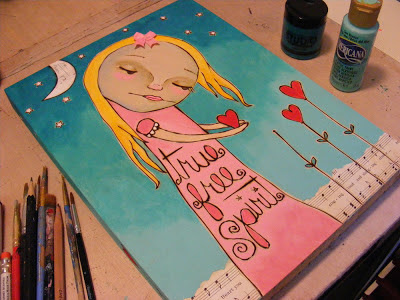 I also added a moon using the music paper, but the print really took away from the composition. So I painted a light wash of white over top to tone it down and that made it blend in much better. A pink ribbon bow on top of her head and she was complete! I love her so much and can't stop looking at her. Creating this piece really brought out my true free spirit! Hooray!
Posted by michelle renée bernard at 5:29 PM 4 comments:

Seeing Stars (and Rainbows, and Cupcakes)! 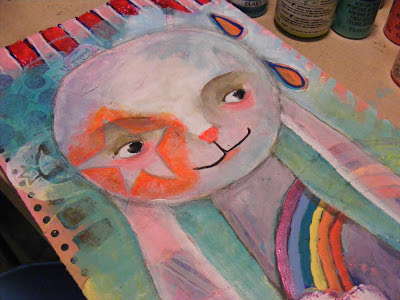 Still finding time to play these days and so I'm catching up on another online workshop I took with Mindy Lacefield called... Frolic! Even the name sounds delightful, doesn't it? 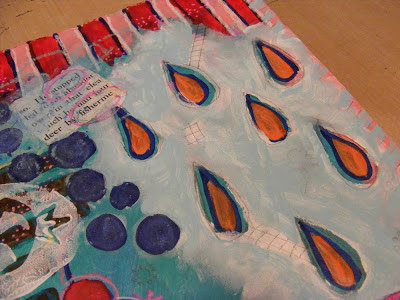 I'm still having a blast creating these wonderfully colorful, lusciously layered backgrounds. Rain drops seem to be a common symbol for me. Not sure why. 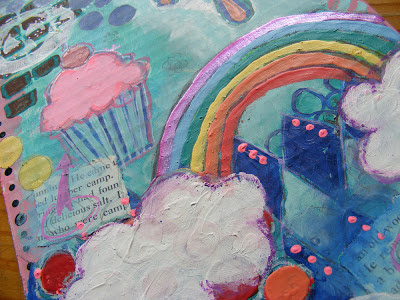 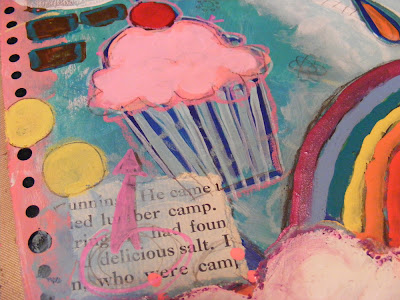 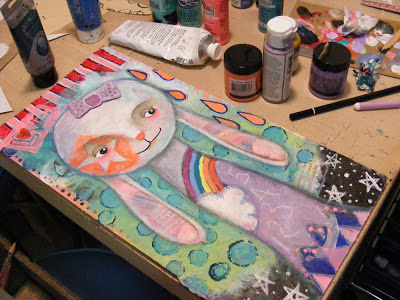 But really I'm just happy to be brave enough to put paintbrush, pastel and pieces of ephemera to paper (or in this case... cardboard). Sometimes the scariest part is just to begin. Remembering how to play is hard for me at times... but frolicking sounds like so much fun!
Posted by michelle renée bernard at 8:30 AM 2 comments: 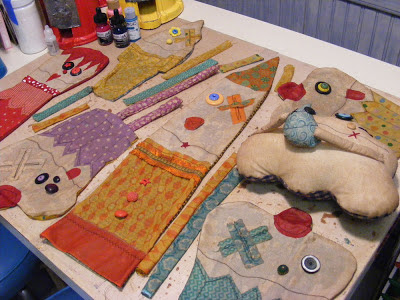 Boy, oh, boy... were your holidays distressing? Because mine sure were. In a good way of course! It was so nice to take some time off just to play and make things (including messes!). I spent a lot of my time working on a few rag dolls. Distressing. Stuffing. Sewing. And it was all very, very relaxing and fun. A winning combination that got me through the holiday season. The cupcake trio turned out to be some of my favorites. Each with a different color scheme... and personality! I had to experiment a bit with the cherries on top and making them look, well... cherry-ish. I tried putting a small styrofoam ball into the doll as a rotund support system, but many of them turned out looking like baseball caps up close anyway. Tee-hee! Who ever heard of a baseball cap-wearing cupcake? 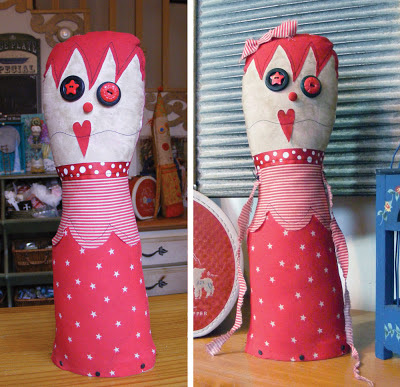 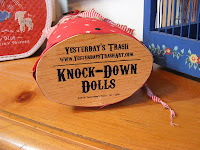 Sometimes the dolls evolve as I go along and this little red firecracker was no exception. When I first chose her monochromatic color palette and put her together, I loved the idea of her... but I wasn't in love just yet. I thought maybe after I distressed her... but no. Maybe after I stuffed  her? Well, that did bring about some changes, because I ended up turning her into a knock down doll (like my Tillies), but, still... there was something missing. So I took some extra striped fabric, ripped her some new arms and a bow for her hair, and.... voilà! She won my heart! 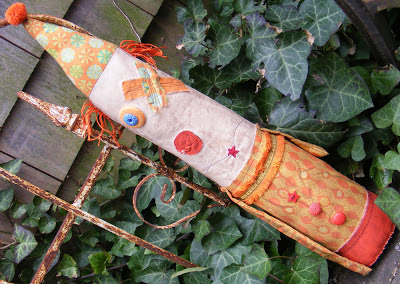 After all that clowning around, I feel refreshed, rejuvenated, and ready to play lots more! I realized that I got so busy last year, I hadn't given myself enough time for fun. So for 2013, there's going to be a lot more playing going on around here. Because, well... I deserve it.