Thinking Outside The Box... 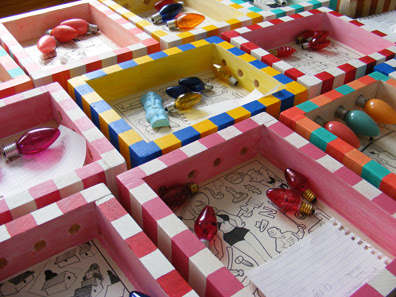 Is this figurative and literal eye candy or what? These carnival-inspired assemblages of mine have become so popular, I'm working on making another 15 of them this week! But as I create the same items over and over, my natural tendency is to evolve a bit... and think outside the box! My mind is always saying, "well what if you did this, here?" or "what if you made that a little different, there?" And so this time I listened. Let's see what's new... 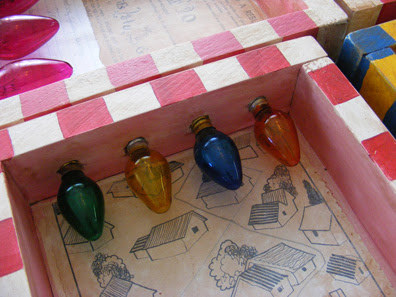 I'm using a bunch of transparent light bulbs I recently acquired at a rummage sale! 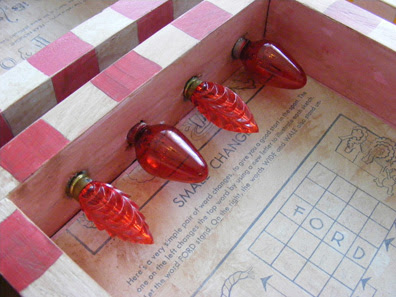 In that same stash, I found two funky Christmas lights, so I paired them up for a monochromatic red version. 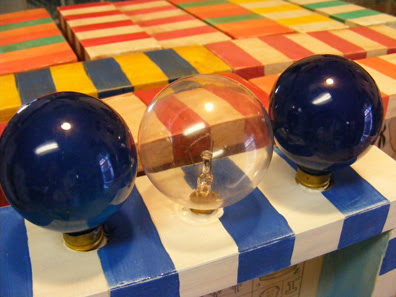 I also found these awesomely round lights and really thought "outside the box"! 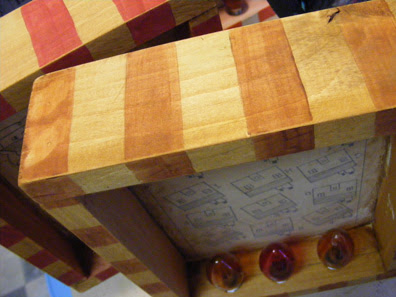 I decided to leave the wood bare on a couple of boxes, and color them with stain instead. Loving these! 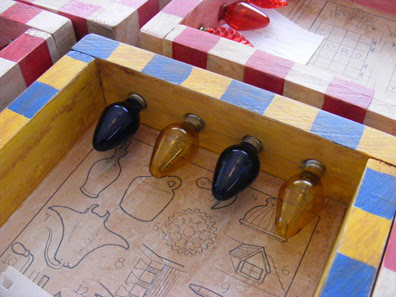 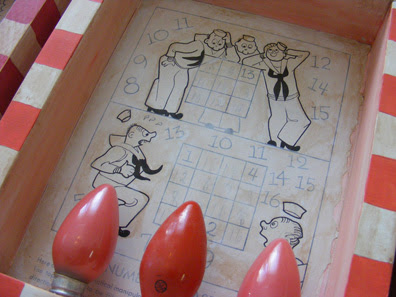 And capitalizing on some interesting vintage illustrations that add to the assemblages! 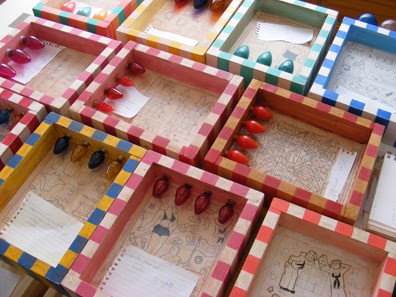 And I have even more surprises... but we'll save that for later. Until then...
Posted by michelle renée bernard at 7:50 AM No comments: 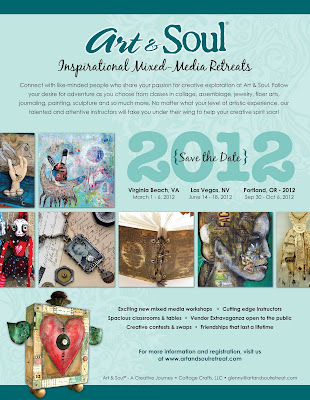 You may or may not know that my original creative background was in Graphic Design. I studied Advertising and Marketing in High School, and liked it so much... I chose it as my major in college. Before I quit my job to make art full time, I worked for several companies in an Art Directorial capacity. In-house design departments, ad agencies, publishers, and a little bit of freelance. I've designed everything from business cards to books, magazine advertising to marketing materials, point of purchase displays to packaging.

These days, I still have one long-standing freelance client — Art & Soul Retreats. I started as a very enthusiastic attendee at their mixed media events way back in 2005 and befriended the owner Glenny Moir. Eventually she asked me to design a logo for one of the retreats, and that led to a few teaching gigs as well. Fast forward a few years, when they were in need of a new Graphic Designer... and the rest is history. 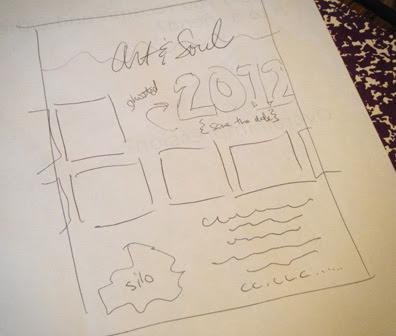 I always have a great time designing the ads for Art & Soul, as the subject matter is... well... my favorite! Funny thing is — even in this day and age of computers — I love to sketch out the ads just like I did in college. It's a habit I never got out of. I mean... computers are fast and all... but not that fast. And I enjoy looking back at my sketch when the ad is finished. Sometimes it's pretty darn close!

Posted by michelle renée bernard at 7:56 AM 2 comments:

Sometimes You Just Have To Sever The Ties! 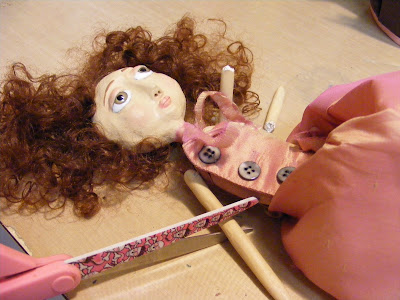 Oh no! I'm cutting off her arms! Yes, that's right... poor little Giselle is getting a bit of a makeover. She was the very first paper clay doll I made with real-looking eyes... and I truly did love her. Really! 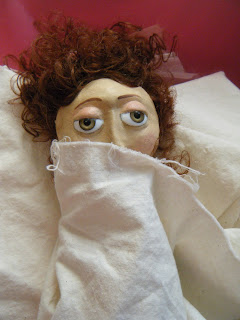 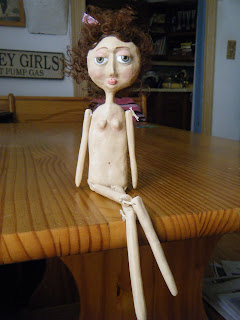 And I was there when she blossomed into a fine young woman. 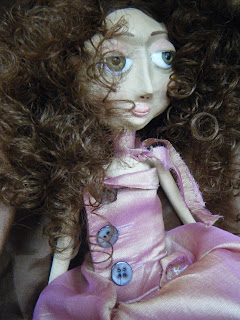 I even made the dress for her first Cottilion. 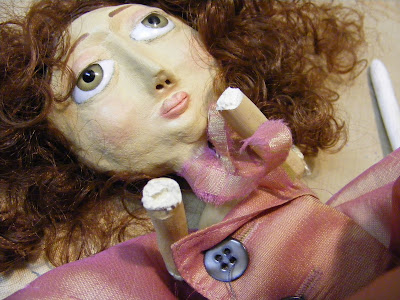 But alas, the novelty wore off and I kept finding things I didn't like about her. So instead of keeping her around looking all at once pretty and sadly pensive... I took things into my own hands. Literally! 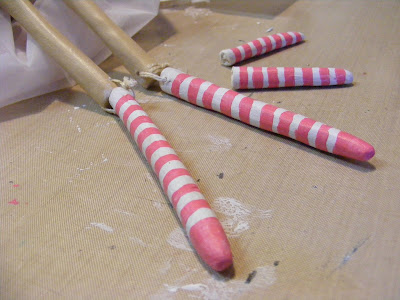 I cut off half her arms so I can make them jointed. I painted them pink and stripey, along with her already-jointed legs. I shortened her dress into a ballet skirt... and there are more changes to come. I'm going to place her — puppet-on-a-string-style — into an assemblage to be entitled... Twisted. In my own whimsically ironic way I am turning things around and using her sadness to my advantage. And I'm looking forward to the journey... 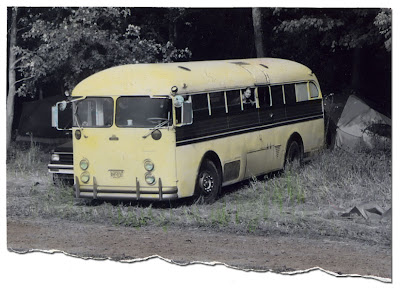 Torn right from the pages of history... 1969's Woodstock Music Festival has to be one of the most influential events of my entire life. Now, I must confess... I did not attend the festival —as I was only one year old at the time — but once I found out about it, I was hooked! 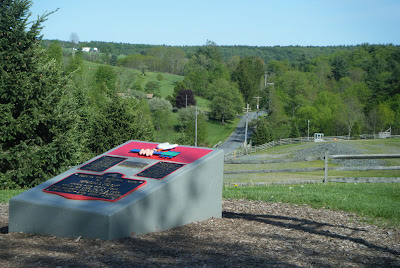 That August brought over half-a-million people to upstate New York for three days of Peace and Music. From Friday the 15th... spilling over into Monday the 18th... people got along, had a good time, and helped each other out.

So what is it that I LOVE about Woodstock? Let me share...

It Rained. And it rained hard. And no one could escape it. But it really brought everyone together. It was the "great equalizer"... where people realized that we're all in this together. Did you know that after the rain, US military helicopters flew overhead to drop dry blankets and flowers! That's right... I said military and flowers in the same sentence. 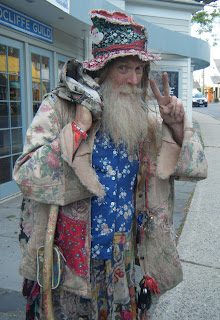 There Were People On Drugs. But you know what? Instead of gathering a bunch of police to arrest these people, they planned for it. They called in members of a hog farm commune who were used to dealing with people on LSD, and they worked it out. They even had a Trip Tent where you would go if you had a bad trip. And once you were better, you became the doctor and helped the next person walking in.

They Ran Out Of Food. Because the New York Thruway was shut down (the concertgoers ended up parking all along it), no food trucks could get in. But people shared what they had. They set up free kitchens. Even people in the neighborhood passed out their own food. Everybody worked together to feed each other.

Freedom Of Expression. Whether it was the music, the way people dressed, the homemade flags and signs, or what you had to say... it was certainly expressed at Woodstock. In fact, Max Yasgur — the man whose farm the concert took place upon — was boycotted for letting them have it on his property. But he didn't care. Just because they were hippies, it doesn't mean they didn't have the right to express themselves.

3 (and-a-half) Days of Peace & Music. People got along. Everyone respected each other. They had a good time. And were creating history. The producers knew it was bigger than anyone could have anticipated... but it was magic. There was harmony. Not only of music... but everybody working together for the common good.

Whenever I get sick of this modern-day rat race... I think of Woodstock. For a couple of days in 1969... they got it right. So on the anniversary of this amazing festival, I encourage all of you to celebrate harmony in your own special way. And if you have time, rent the 3 hour movie... put a blanket down in your living room... grab a bottle of your favorite wine... and just sit back and enjoy the show.

Peace xoxo
Posted by michelle renée bernard at 7:37 AM 1 comment: So what's with my obsession over big-eyed dolls, cartoons, and other miscellaneous characters? I've always been drawn to them. Oh, and juxtapose a big giant head with big giant eyes on a tiny little body... well, then I'm in love! 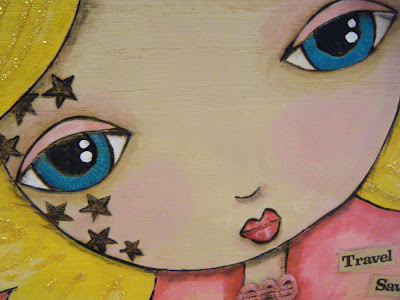 Perhaps it's that eyes just draw you in (pun intended!). I mean... there's so much emotion that can be read from looking at the eyes, even if they are drawn in. 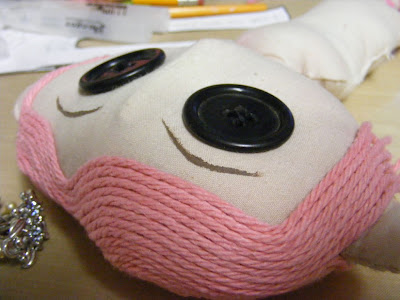 Maybe it's because in addition to being adorable, they just happen to be a little scary. Cute and creepy... that's definitely me! 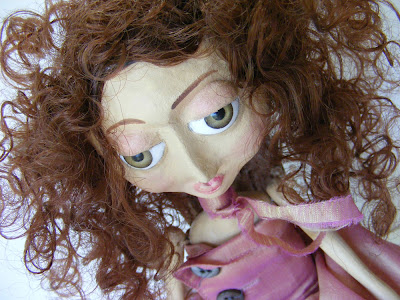 Or maybe it's because they look so sad. You just want to scoop them up, tell them it's okay, and make them feel all better. 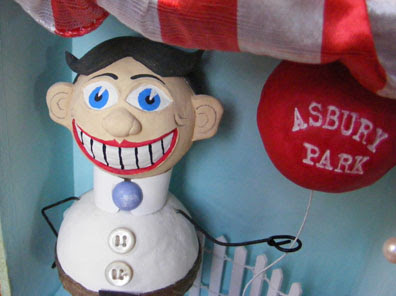 But whatever the reason... I am inspired and amused by these wide-eyed wonders every time I look at them. And what could be better than that?
Posted by michelle renée bernard at 8:58 AM No comments: 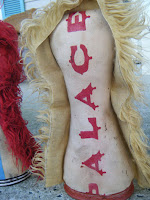 So maybe you've always wanted to paint some nifty lettering on a fabric project, but you're not so good with drawing. Well, guess what... me neither!

I know what you're saying, "But, Michelle, there's no way I can draw out the letters I want... they're all wonky and misshapen... and they end up all crooked and stuff!"

Well, let me show you a little secret. I call it my Instant Lightbox. It's absolutely free, it's super simple, and you can use this technique for lettering, or any other piece of artwork you'd like to "transfer" onto fabric. 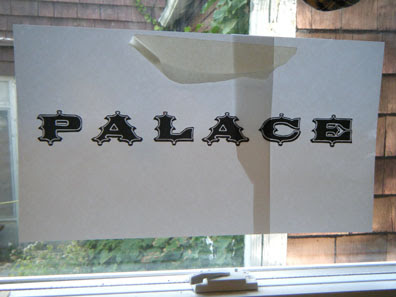 Print out your text (or image) onto regular copy paper. My image was a little longer than a letter size sheet, so I pieced it together. Tape your artwork onto a window with lots of sunlight coming through. Then you can tape your piece of fabric over top of your artwork, trace the image with a pencil, and voilà... you're ready to paint! 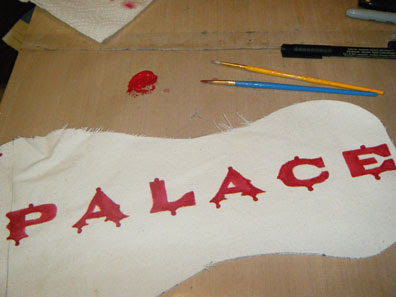 A professional-looking, hand-painted fabric masterpiece. And no drawing ability needed!
Posted by michelle renée bernard at 8:03 AM 1 comment: 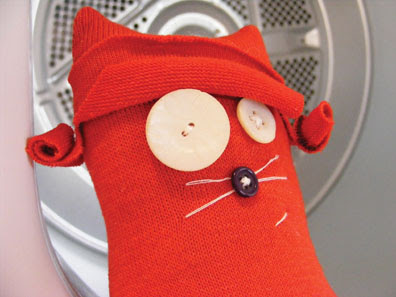 Sometimes.... there's just not a whole lot to talk about.
Posted by michelle renée bernard at 7:49 AM No comments: 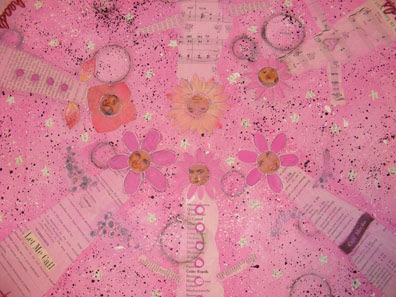 What can I say? I love the color pink. It's so happy and whimsical and flirty... it just makes me smile. And when I ran across this photo of these smiling retro-style ladies... well, I was just tickled pink! The overhead view of this circular piece (that ended up being a tabletop), just made me dizzy. Kind of like how I feel after doing an art show. There's lots of fallout, cleanup, tallying, re-organizing, and figuring out what to do next. I'll let you know when I figure it out. Stay tuned... you never know with me!
Posted by michelle renée bernard at 7:57 AM No comments: